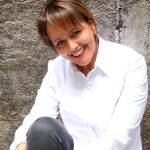 Curious and innovative, renowned Spanish chef Maria San Román dedicates a great part of her time to investigating products that are native to Spanish gastronomy such as saffron, a product on which she is considered an international expert. She is a champion of the qualities of extra virgin olive oils, involved in the ‘OliveToLive’ project which promotes a dispenser that conserves the qualities of EVOOs in premium condition.

Together with her husband José Perramón, they are proprietors of the Grupo Gourmet Alicante, a gastronomic project founded in 1975 which has continuously evolved, garnering a successful role in Alicante’s hospitality offering. The Monastrell restaurant has received a Michelin star.

So people are taking the Oro Bailen, Masia el Altet… all the small producers making a small amount of very, very, very high quality. Marqués de Griñón also doing very very well. [inaudible 00:23:18] also now doing very good. Even Alejandro Sanz, the singer, who was doing a terrible olive oil, two years ago, and I spoke to him and I said “How could you do that and only make ten thousand liters. I mean, do it well. And now I know this year, he’s making an amazing olive oil too. So I think it’s a matter of short time because people are getting to know that, if they make it good, it’s a very big market in the world, and they can send olive oil to China, to Japan, to America. I mean the world is very big of non-producers of olive oil. So they’re getting to the high-quality production. I think this is increasing a lot in Spain.

Curtis CordOf course, it wasn’t too long ago when things were very different in Spain, and the focus was on yield and on quantity, rather than quality. But then there was a shift, and do you remember when that happened?
Maria José San RománQuite probably Beyond Extra Virgin was part of that. But it comes also with the gastronomy revolution in Spain. The people are very concerned about food and about gastronomy. And even while we were talking about chefs, because I am very thick of my rules, of course there are people using the good quality olive oils, But it’s not that they are so proud as I am. You know for me, I am always talking about that. They just use it as another ingredient and they’re not concerned. They don’t know that they are using such a jewel in the kitchen. So I think it’s coming with the revolution of the Spanish gastronomy around the world, it comes together.
Curtis CordYou wrote a cookbook for saffron not too long ago.
Maria José San RománI’ve got my book but it’s not published. Because I don’t have a publisher. Everything is ready to go into, I don’t know.. I say it will be an iBook probably.
Curtis CordI think what we need, even more than that, is a cookbook from Maria José San Román, on cooking with extra virgin olive oil.
Maria José San RománOkay, we can make it. I mean I’m ready to do that. I just need the publisher and I know Brigida will do that with me, with pleasure, she bill be a big go.
Curtis CordWell count me in.
Maria José San RománOkay, you can be the promoter and we are here to put our part. Okay.
Curtis CordWith great pleasure, I think it’s what we need. It’s what a lot of people need.
Maria José San RománYes, I was just talking about this with Peter Kaminsky, in New York, last time I was there. He was also interested in making the book, so he said “We could do it.” But no more about that. I don’t know. I’m in your hands now. Now I am very glad you count on me for this, because I enjoy being part of the olive oil world. I am so happy to know about this product, and I am more than happy to share it with everybody.
Curtis CordWell I was thinking, for this program on olive oil, one of the first things we needed to do was talk about olive oil in food, and olive oil in dishes. And I thought about, who can speak to this topic? And, really, your name was the only one that occurred to me. You’re the only one I thought of. And this tells you how few, even the best chefs in the world, of which you are among them, how few chefs can talk about olive oil, can understand olive oil and all that it can do. And all that it should do. Thank you very much for sharing your thoughts, and I hope to see you again soon.
Maria José San RománThank you, Curtis, I know you and I will reach them.
This episode was pubished November 13, 2015